FLC works with these peoples to empower them spiritually and physically: 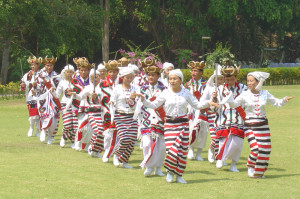 Daniel Kalnin was a member of the Rawang, an otherwise little known but significant tribe located in the northernmost tip     of Burma and neighboring western China. In Burma, their population is estimated at 147,000, with fewer than 1,000 in      China. In China they are known as the Derung people and officially recognized by the Chinese government. The Rawang are   believed to have migrated from Tibet about A.D. 900 to 1000 and to be Tibeto-Burman in origin. It is believed that 80% of     all Rawangs are Christians. Many of FLC’s full-time and temporary employees are Rawangs, as are most of the Barefoot      Doctors. 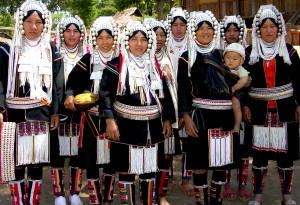 Most scholars agree that the Akha are of Tibetan origin. The Akha have a detailed creation epic poem. Long recitations,  committed to memory and handed down from parents to children, are essential for continuing the Akha culture. Among the  Akha, it is important for a man to be able to memorize his complete genealogy right back to the first man, Sm Mi O. To be  unable to do so is considered a disgrace. The Akha genealogy now covers more than 60 generations.  Akha women have a  striking appearance. They wear heavily decorated headdresses and skirts. Made from beaten silver, Indian rupee coins, fur,  beads, and feathered tassels, the Akha headdress is removed only for the purpose of cleaning and washing their hair. There  are nearly 500,000 Akha in the region. 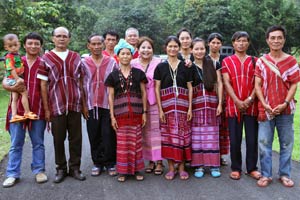 There are 18 identified sub-groups of the Karen people with an approximate population of three million living mostly in southeast Burma. The percentage of Christians ranges from 5% to 90% depending on the sub-groups. Large Karen refugee camps lie just inside the Thai border. Traditionally, most live by wet-rice farming. Some own elephants and work as mahouts in the teak forests of Burma. Their folk history speaks of them as orphans who lost their writing system after God handed it down to them, but will have it returned one day by visitors from a faraway land. When the Karen first came into contact with Christian missionaries, many thought this promise of their history had finally been fulfilled. The first Karen (Ko Tha Byu) was reached by Adoniram Judson. 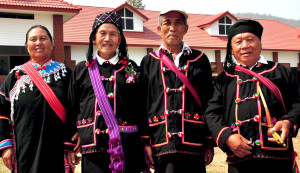 Generally, Lahus live at elevations of 4,000 feet or higher.  Most of the 713,000 live in China and Burma, and only about 35,000 in Thailand. Legend says the name Lahu means “to roast tiger meat by the fire.” Although guns are used, men still hunt with cross-bows and poisoned arrows. When the American Baptist missionary William Young first preached the gospel to the Lahu in northern Burma in 1901, they exclaimed, “We as a people have been waiting for you for centuries… We even have meeting houses built in some of our villages in readiness of your coming.” Many of the Lahu men wore strings on their wrists. They explained, “We Lahu have worn [strings] like these since time immemorial. They symbolize our bondage to evil spirits. You alone, as the messenger of G’ui Sha, may cut these manacles from our wrists—but only after you have brought the lost book of G’ui Sha to our very hearts!” More than half of all Lahu in the region are Christian. 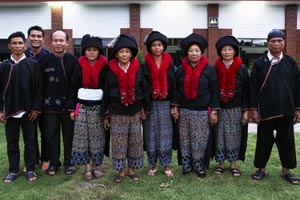 Yao and Mien are synonymous terms. The Chinese government assigned the name Yao as the official minority name, but the people refer to themselves as Mien. Culturally, the Yao-Mien people reside predominantly in China and Vietnam with small populations in Thailand and Laos, with significant immigrant populations in the USA and France. The Mien are unique among tribal people, having a tradition of writing with Chinese characters which dates back several centuries. The Mien likely emigrated from the southeastern coast of China into the Southeast Asian region in the fourteenth century. Their legends include numerous books; one for betrothal and birth, another for ancestor ceremonies, and the “Mien Passport,” which gave them certain rights as the “children of Emperor Pien Hung.” The women are highly skilled embroiderers working the intricate cross-stitch designs into much of their clothing. 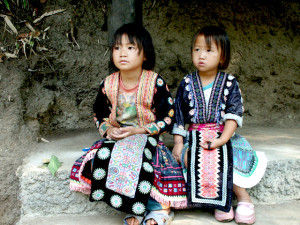 As with the Karen, the Hmong include numerous sub-groups. As a result of many wars waged against the Hmong during the Qing Dynasty, most of the survivors dispersed throughout the region. The Hmong in Vietnam and Laos migrated from China at the end of the 1700s and the beginning of the 1800s. Because of their geographical separation, the two Hmong Njua groups in China and Vietnam have no extensive sociocultural contact and do not consider each other to belong to the same group. The color of a woman’s dress often identifies the sub-group—white, red, black, or flowered—to which a Meo of Viet Nam, Laos or Thailand belongs. Although there are large Christian communities among the Hmong Njua in Vietnam, their counterparts in China are an unreached people group.

The Shan dwell in permanent settlements along river valleys and in pockets of level land amid the hill country of northeast Burma, northwest Thailand and southern China. The Shan are a large people group who migrated south from China in the twelfth century and established three small states in Burma. The Shan language belongs to the southwestern group of tonal languages. The people refer to themselves as the “Great Tai.” Nearly all Burma Shans are Theravada Buddhists who, until recently, lived within a distinctive structure of feudal states ruled by hereditary princes. It is estimated that as much as 50 percent of the world’s illegal opium is produced in the Shan State. Less than one percent of the nearly 4.3 million Shan in Burma are Christians.

Kachin is the name formerly applied to various Hill Peoples of northeast Burma. Kachin refers only to the groups speaking Jingpho and closely related languages of the Sino-Tibetan family. Approximately one million Kachin reside in northern Burma and some in China. The women adorn themselves with mantles of silver tassels and disks. The Kachin sustain themselves by trading the rice they produce with the valley-dwelling Shans. Approximately 64% of these tribal people are Christians.

The Lisu live in China, Burma, Thailand, and India. They are one of China’s official minorities. The name Lisu means “come-down people.” Their original home was in eastern Tibet, where they had a kingdom in the tenth century before they migrated to their present homes in Southeast Asia. Their mass turning to Christianity was due in part to their ancient belief in Wa Sa, a supreme god of healing and a village guardian. During one interrogation by the Communists, a young Lisu man exclaimed, “Christianity has already penetrated into our flesh and blood and it will not be easy to tear it away from us.” Over 85% of the 1.2 million Lisu in all three countries are Christians, and they reach out to other people groups.